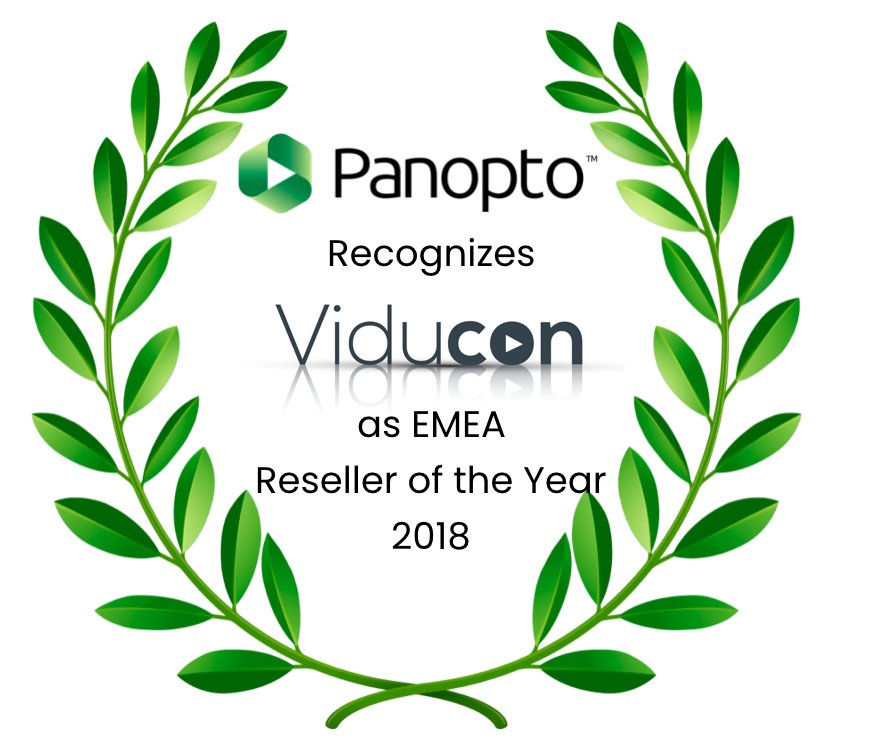 Reseller of the year!

By Wiliam | Events, News and Updates, Nyheder, Updates from Viducon

Last week at #panopto18, the annual Panopto conference in London we were inspired but also walked away with some accolades. Viducon was awarded as the top reseller in EMEA for most new clients and most client renewals.

That means if you’re reading this, THANK YOU. It is your commitment to better education through video that help makes this possible. We’re happy to be on this journey together and look forward to bringing new and better video experiences to you and all of your viewers.

Viducon participated at the Digital Learning Networking Conference, hosted by SmartLearning, in Aarhus on the 18th of May, 2017. SmartLearning which organized the event, is a unit of Copenhagen Business Academy (Cphbusiness), which supports educators in their efforts to digitalize their teaching, by using learning technologies. This was the second annual conference organized by SmartLearning, which took place at Business Academy Aarhus (Erhvervsakademi Aarhus), where around 160 participants had attended.

The purpose of the conference was to help teachers and educators from Denmark, to better understand the benefits, which digital learning can bring to the organization, and the role of learning technologies in future education.

At the conference a few examples of best digital learning practices were introduced, educators had a chance to meet with leaders of Danish educational institutions, and network with colleagues from different institutions, who are also interested in this highly interesting field.

During the conference, the future challenges in education were introduced, where the issue of uncertainty, of what would be relevant to teach in future studies, was brought up and discussed. The speakers presented how educators though, could adjust to these new circumstances by applying new teaching methods and using tools already available, in a variety of learning technologies, such as educational videos.

Panopto, which was one of the main sponsors of the event, had a stand together with its Danish business partner, Viducon, where participants could talk with representatives of both companies and receive some info about Panopto’s world leading video solution.

At the stand participants could get some inspiration from the many user cases, applied at universities and colleagues around the world who are using Panopto, such as Copenhagen Business School (CBS), Cphbusiness, Yale and Oxford.

Especially for the occasion Viducon created an online voting system, where all can nominate the Video Educator of 2017, be it from the educational or businesses sectors. Viducon would like to praise the educators for their extra effort, and therefore would need your assistance in nominating and voting.

Please give your educators a pat on the shoulder by nominating and voting for them here: VOTE

If you are interested in trying out Panopto video solution at your organization, please, contact our team for a personalized demo or sign up for a 30-days free trial.

Reflections on the Panopto Conference 2014: ‘Innovation with Video: Improving teaching and learning through technology’

This week Panopto EMEA held its annual conference at Senate House, central London. We have been running similar events ever since we set up an office in the UK to bring the community together to discuss the opportunities and challenges surrounding the use of video at education institutions. This year we focused on innovative use cases for video and how these can be supported. Our inspiration for much of the content was, of course, the experiences of our users and their students.

We have seen increasing numbers of universities and colleges start to move beyond using Panopto exclusively for lecture capture and exploring the ways in which video can open up new approaches to teaching and learning. We were lucky to be joined by representatives from nine customer institutions who covered a whole range of different uses for Panopto including supporting the flipped classroom, offeringvideo feedback, enabling student recordingsand live webcast of events, and facilitatingteacher training and student assessment.

I kicked the day off with some trends we’ve noticed in the growth and diversification of video use within UK higher education over the past four years. During this time, we have seen mainstream acceptance of lecture capture accompanied by increasing (albeit smaller scale) uptake of newer video uses. However, it’s also fair to say that while theconcept of lecture recording is now commonplace, recent research from UCISA suggests that it is still only being used within a minority of courses at most institutions.

I was followed by David White, Head of Technology Enhanced Learning at the University of the Arts London. In his keynote talk, he urged universities to re-humanise their digital content and talked about the possibilities video lectures offer to do just that. Using tweets from Aston University students as an example, he showed that students watching lecture recordings back will comment on the fact they can hear themselves ask a question in the lecture hall. This demonstrates that it is important to them that they were physically there and can therefore re-live aspects of the lecture experience digitally afterwards. He went on the comment that the idea of ‘presence’ is still vitally important to people – that lecture recordings can help extend the idea of presence into a digital environment, complementing, rather than replacing, face-to-face interaction. His talk also challenged the notion that universities should merely meet student expectations, pointing out that most students don’t come into higher education with a firm idea of how they will be taught. He suggested instead that universities should look to implement the most engaging teaching methods and clearly communicate to studentshow they are going to be taught, not just what they are going to be taught.

The Students’ Take on Video in Education

David’s session was followed by a panel of students talking about their own use of video and lecture recordings. Representatives from Newcastle University (David Morris), the University of Essex (Mikya Rozner) and the University of Birmingham (Lauren Morrow) debated themes such as whether students would stop coming to lectures if they were recorded, the impact on their learning experience when only some lectures are recorded while others are not, whether or not video of the lecturer made a difference (as opposed to just capturing audio and slides/screen) and the effectiveness of flipped classroom teaching.

All of the students felt that as recordings are usually used to consolidate knowledge or revise, physical attendance at lectures was unlikely to be affected. They also agreed that having access to only some lectures was frustrating and felt that lecture recordings were useful across the board and should be made available more widely. Those that had access to lecture recordings in their first year, but not for courses in subsequent years described their surprise on discovering that this technology was not standard.

There was a difference of opinion over the importance of having video of the academic accompanying the audio and slide recordings. David from Newcastle University felt that the recordings were purely functional and therefore audio and slides were sufficient, whereas Lauren from the University of Birmingham and Mikya from the University of Essex felt that video added a compelling extra layer of personalisation and engagement that they believed made the recording even more useful.

Lauren then talked about her experiences of the flipped classroom, suggesting that the more active learning facilitated by this teaching method ultimately gave her a richer learning experience.

An academic panel featuring Dr Laura Ritchie from the University of Chichester, Dr Phil Ansell from Newcastle University, Dr Jeremy Pritchard from the University of Birmingham, and chaired by Sarah Sherman representing the Bloomsbury Colleges then responded to the comments made by the students. They also talked about some of their own personal experiences of increasing use of video at their institutions.

The Future of Video at Education Institutions

The morning sessions concluded with a talk from Panopto’s Founder and CTO, Eric Burns. Eric took a look at the future of video and how this would impact education institutions. His ultimate conclusion was that while video use is set to grow even further,ultimately bricks and mortar institutions will emerge stronger, with digital technologies helping universities and colleges respond to students’ digital needs while also allowing them to reimagine the contact time they have with learners in the real world.

These sessions provided a fascinating insight into the varied ways institutions are now using Panopto and it was really inspirational to hear about the effects some of these new teaching approaches were having on the student experience.

Running in parallel, we had technical sessions covering the following:

Attended by more than 120 delegates, the event provided a fantastic forum for learning, debate and discussion. As the CEO of Panopto EMEA, it was a chance to reflect on how far we’ve come and how lucky we are to have such an engaged user base who are actively experimenting with video so that they can exceed, not just meet, student expectations.

This article was originally published on Panopto’s blog

Any cookies that may not be particularly necessary for the website to function and is used specifically to collect user personal data via analytics, ads, other embedded contents are termed as non-necessary cookies. It is mandatory to procure user consent prior to running these cookies on your website.